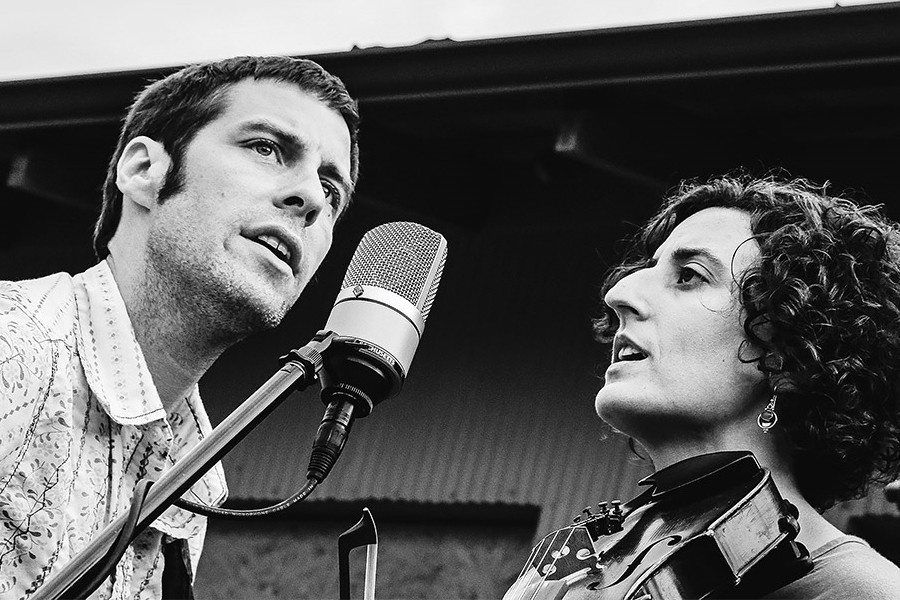 Heart of Folk welcomes Zoe & Cloyd to the Talia Bassment Club on Friday June 26.  The show will begin at 7:30 with doors opening at 6:30.  Tickets may be purchased by calling 336-990-0747, at Talia Espresso or online at etix.com.  John Cloyd Miller and Natalya Zoe Weinstein are two of the three members that make up the group Red June.

John Cloyd Miller is a twelfth generation North Carolina native and the grandson of pioneering bluegrass fiddler and NC Folk Heritage Award winner Jim Shumate.  John’s foundation in traditional bluegrass and old-time Appalachian music coupled with his modern sensibility and award-winning songwriting combine to make him a natural musician and performer.  He can sing tenor to just about anyone and is well known for his haunting mountain voice as well as his prowess on mandolin, guitar and clawhammer banjo.

Natalya Zoe Weinstein also comes from a musical family and is an accomplished fiddler in a variety of styles as well as an inspiring singer and songwriter.  While trained classically in her home state of Massachusetts, she has spent many years fine-tuning her bluegrass and old-time fiddling after spending time with some of the top traditional musicians in North Carolina. She is also in high demand as a teacher and session musician.

John and Natalya have been making music together in various arrangements since first meeting in 2005. Their journey began with a series of shows with their current bandmate in Red June, Will Straughan.  In 2006, Natalya joined John’s bluegrass band, Lo-Fi Breakdown, and in late 2008 she, John and Will officially formed Red June.  The band has toured extensively across the country and has recorded three highly acclaimed albums to date, including original material from both John and Natalya.