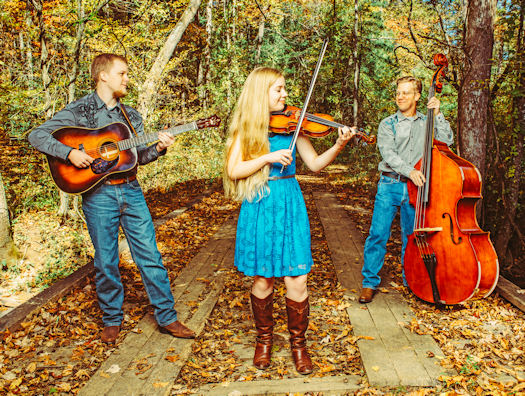 Join us Friday, March 24 at the Talia Bassment Club for an evening of great entertainment with the Snyder Family Band. Doors will open at 6:30 with the music beginning at 7:30. There will be a special dinner prepared upstairs by Talia Espresso from 6:00 – 7:30. Please contact Talia Espresso at 336-838-0111 for dinner reservations.

The Snyder Family Band from Lexington, NC, performs a blend of family friendly music that appeals to all ages and audiences. What the listener will find exciting about a Snyder Family Band show is how these young musicians take from multiple genres and create a unique sound that includes not only bluegrass, but also southern rock, blues, Texas swing, and newgrass

Beginning in classical violin lessons at age three, Samantha, now sixteen, is an award-winning fiddler as well as a top-notch singer and songwriter. She was selected as fiddler and lead vocalist for the 2013 Youth All-Star Bluegrass Band that performed at the 2013 IBMA World of Bluegrass Awards Show held in Raleigh, NC. Her songwriting and creativity are a big part of the Snyder Family Band sound. She occasionally plays guitar and mandolin during a performance as well. Whether fiddling or singing, Samantha creates a warm and energetic feel on stage that demonstrates her true enjoyment for the music.

Supporting these gifted young musicians, their dad, Bud, holds down a rock solid upright bass rhythm. His ability to adapt to the multiple genres that influence the band is a key ingredient of the trio’s signature sound.