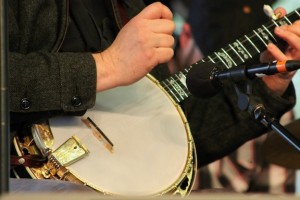 Doctor Coble Walsh was born on July 23, 1901 in Lewis Fork (now Ferguson), Wilkes County, North Carolina.  He was born into a large family with seven siblings, all of which grew up playing music.  He was a teacher by trade, but decided to try music as a career after hearing Henry Whitter’s recording of “Wreck of the Old 97” on Okeh Records.

He bought a good Bruno banjo in Lenoir and used it in his recording sessions.  He teamed up with two Gastonia area guitarists, Dave Fletcher and Floyd Williams, forming the Four Yellowjackets.  A talent scout out of Atlanta heard them, brought them down to Georgia, where Ralph Peer recorded four duets with Foster and Walsh naming them the Carolina Tar Heels.

Doc’s recording career ended in 1932 and he worked in the poultry business to support his growing family.  Later, in the 1950’s, he became an outside salesman for an auto parts firm called C.D. Coffee and Sons in North Wilkesboro.

While Doc took a break from his music career, music was definitely not over for him!  During the folk revival of the 1960’s, many folklorists wanted to seek out stars from the golden-age of old-time music, which included Doc Walsh!  Gener Earle and Archi Green brought Doc Walsh and Garley Foster back together to form the new Carolina Tarheels.  Doc’s son, Drake, also teamed up with them in this new group.  They recorded an album with Doc Watson for Folk Legacy Records.

After a life filled with a love of music and family, Doc Walsh passed away in May of 1967.  He not only left a left a mark in the music world, but was a great example of a father.  He cared for his family first, and his deep love of music came after.